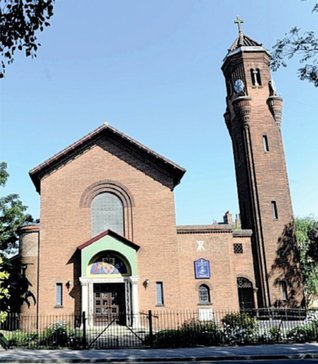 The current St. Vincent's R.C. Church was built on its present site in 1932 replacing the adjacent building which had originally served as both a school and a church, but which now houses St. Vincent Primary School. The original construction had its roots in the late 19th century as Hull expanded exponentially, the Church ministering to increasing numbers of Roman Catholics.

The new church was the favourite project of the parish's dynamic priest Father Patrick Macken, who modelled the church on the Romanesque church of the English Martyers in York and insisted on the extravagance of the striking campanile. His determination to build an inspiring church, however, rewards the visitor today who can admire the designs and symbolism of the many colourful mosaics throughout the site.

Other interesting features include the stations of the cross around the interior and the second best organ in the city (after the City Hall).