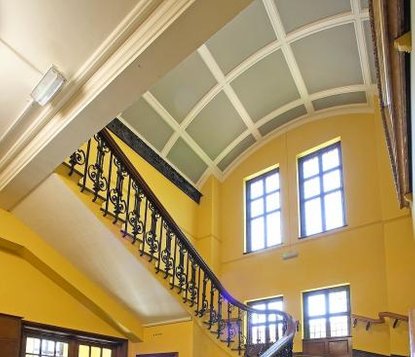 Visitors will be guided by a member of the museums team around interesting parts of the building not normally open to the public, such as the beautiful mosaic-floored vestibule and impressive barrel-vaulted stairwell which contains a fine early 18th century carved frieze from the Hotham house formerly in Eastgate, probably by the celebrated York carver William Thornton who worked for Nicholas Hawksmoor in stabilising Beverley Minster’s north transept, and also carved the  Minster’s font cover and great west doors.

The original Queen Anne style Library and Art Gallery was founded by John Champney and others, with the intention of empowering the people of Beverley to become better educated informed and to enrich their lives culturally.

On Saturdays during Heritage Open Days East Riding Archives will be providing a window display of documents relating to People Power in the East Riding by establishing such organisations as Friendly Societies and multiple different forms of Methodism.

The Treasure House is the East Riding’s centre for culture and heritage, providing access to the Museum, Archives, Library, Art Gallery and other display spaces. East Riding Archives collect and preserve the unique written heritage of the area and make it available for everyone for family, local and community history.

The Museum showcases the fascinating heritage of the area, highlighting the countryside, its communities, coastline and its links to the wider world.

Also at the Treasure House is Beverley’s delightful Edwardian art gallery, home to the Champney Collection featuring works by leading British artists of the 19th and early 20th centuries including Arthur Hughes, Albert Goodwin and Helen Allingham. It contains large collections of works by the Beverley-born artists, Fred and Mary Elwell. The newly refurbished gallery also offers an exciting and diverse programme of exhibitions. The Coffee Lounge has delicious hot and cold drinks, snacks, light meals and tempting cakes.