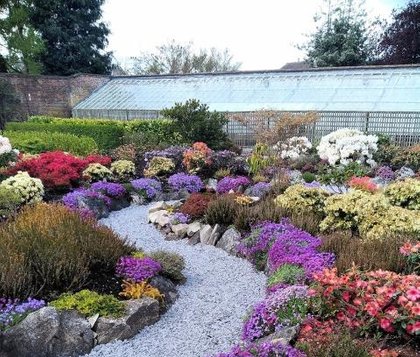 Not open other days

Bishop Burton is a modern and highly successful land-based college some 3 miles from Beverley, teaching a wide range of further and higher education courses and qualifications.

The College was founded in the 20th century in the area where for centuries the medieval archbishops of York had a manor and a deer park.

After the English Reformation the archbishop’s property was acquired by a succession of landed families who built grand houses, and the Victorians landscaped the deer park (the ancient park boundary, called The Reins, can still be seen at the north-western boundary. In 2019 there are about 24 acres (10 ha.) of gardens and shrubberies.

The existing walled garden is (from the brickwork)probably late 18th or early 19th century. It is possible the garden was built in the 1780s, before the hall was gutted by fire and abandoned c. 1790. The Ordnance map of 1854 shows the walled garden divided into two sections, of which only the north survives, with greenhouses of c.1890.

Walled gardens are a very ancient form of garden, both for pleasure and for providing and protecting food from wild animals and rough weather. Most English country houses had these intensively cultivated plots, and with greenhouses they could feed large numbers of people for much of the year.

The head gardener will be available in the walled garden and will do his best to answer any queries you may have.