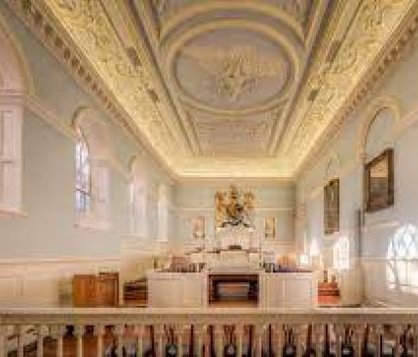 The Guildhall has a wonderful interior behind a plain classical front and represents over 500 years of Beverley's civic pride. Based on a medieval great hall, the building itself was substantially re-modelled in the 18th and 19th centuries and features a stunning courtroom with ornate plaster ceiling by Giuseppe Cortese, a magistrates' room with original 17th century furniture and an elegant parlour with a silver collection dating back over several centuries.

You can also see the current local history exhibition, and this year for Heritage Open Day there will be a special display of material relating to William Crosskill, Beverley’s great Victorian inventor, whose foundry made gas lamp standards for the town from the late 1820s but subsequently (although he made the lamp standards for Hamburg's gas lighting too) he specialised in agricultural machinery, lodged patents for his inventions, exhibited the machines and won prizes; especially successful was Crosskill's Patent Clod Crusher. He provided carts and wagons for the Crimean War, and from his Liverpool branch, a special agriculture kit for emigrants. He was also the mayor of Beverley.

Please be aware of ancient floors and some shallow steps.

Parking behind the Treasure House in Champney Road, disabled parking in Cross StreetContact for the day:Kloskk Tyrer 01482392783
beverleycivicsociety.co.uk

Register Square is off Cross Street