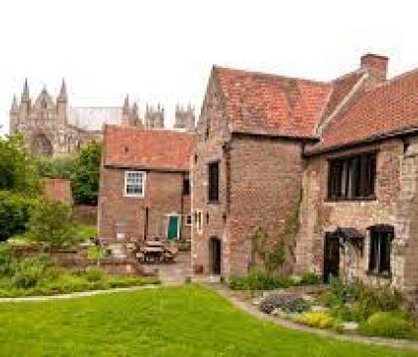 The old Dominican Friary has an exotic 800 year history: come and see this hidden treasure.

The remains of the once vast Friary lie within 150 metres of the Minster, yet relatively few people know that it exists.
Founded in 1233, the church and cloisters now lie below the railway line and Armstrong Way: the east end of the church is outlined in modern brick in front of East Riding College. The archbishop of York (lord of Beverley) confirmed Stephen the Goldsmith’s gift of the site to the Dominicans, also known as the Black Friars from the colour of their robes. Chaucer’s friar who wandered around Holderness was a Dominican. The first buildings would have been constructed of timber, gradually replaced by stone, brick and tile. The present buildings may have been the friars’ library and dormitory: they were probably rebuilt after the Reformation using original materials. The W end is post Reformation, as is the porch.

Today the exterior is a fascinating mix of architectural styles and materials, set within the Friary’s land. Within there is a great hall with a hammer beam roof characteristic of the 15th century. There are striking 16th and 17th century features including a tiled floor, remarkable wall-paintings (rarely on view but open for Heritage Open Day) and a restored limestone fireplace. New information about the history of the Friary has been discovered recently, such as the friars' fate in 1538, a connection with Henry VIII in 1541 and the pillaging of the building in the Civil Wars.

Uneven paths, only the ground floor is accessible to those with walking difficulties

Areas with Tudor wall paintings will be shown to groups. Parts of the building (the dormitories of the Youth Hostel) will not be open.Contact for the day:Chris Dawson ‭01482650225‬
www.beverleycivicsociety.co.uk

Near the bridge over the railway line that connects Friars' Lane with the Flemingate development.