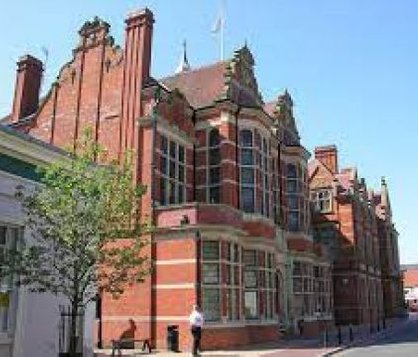 East Riding of Yorkshire Council occupies many interesting buildings - join us for a tour with the Conservation Officer.

A guided tour by Stephen Walker, Conservation Officer of East Riding of Yorkshire Council, around the great variety of listed buildings of architectural interest that form County Hall, many of which are normally inaccessible to the public. He will demonstrate how some of the older architectural features were adopted into each of the new buildings. In 1889 the three Ridings (=thirds) of Yorkshire, named East, North and South before 1066, were given independent county status, and all three built headquarters, called County Halls.

East Riding County Council bought the Mechanics’ Institute building in Cross Street (formerly the site of Victorian political shenanigans recorded in a Parliamentary report and in Anthony Trollope’s novel Ralph the Heir). The council used the site to construct a new building designed by Smith & Brodrick of Hull.

Now greatly extended, County Hall, a splendid red brick building in Flemish Renaissance style, still contains the original Council Chamber, little altered over the years. It has classical decorations, with wooden furniture carved by James E. Elwell (d. 1926), twice mayor of Beverley – and father of the Beverley painter Fred Elwell. There are no less than ten listed buildings that make up County Hall, the former Gentlemen's Club, Registry Office, Registrar's House, Police Station, Police Hostel and Library, former Hall/Dispensary, The Gables (no.5 Lairgate) the boundary wall to no.65 and the old Manse.

Some disabled parking in street. May be some uneven ground