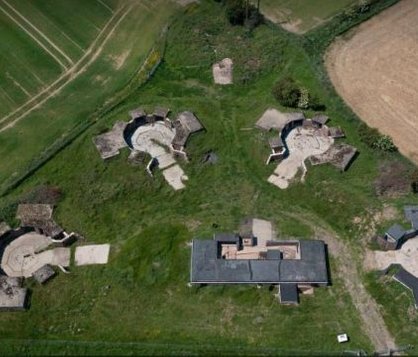 A remarkable survival of the Second World War, a defensive battery to guard the Humber.

The Heavy Anti-Aircraft gun site or battery, known as H31, consists of four gun emplacements around the command post. Equipped with 3.7 inch guns, it became operational in 1941, forming one of about 50 permanent gun sites on both
sides of the Humber to defend against aerial attacks. Hull was a target throughout the war, and suffered 815 air raid alerts, with around 1,200 civilian fatalities and 87,00 houses damaged (94% of the housing stock). The battery employed more than 300 personnel, men of the 62 HAA Regiment and women of the ATS, housed in huts on site.

At the end of the Second World War, the site was retained until the mid 1950s when it was abandoned.
Visit this remarkable survival, being restored by the present owners of the farm. The site is now protected as a Historic England Scheduled Monument. For a very detailed description, visit thewebsite.

We regret that the tour is not suitable for people with limited mobility.

Butt Farm is accessed from the part of Victoria Road which leads from the western side of the A164 about 200 metres to the south of the roundabout serving Morrisons or, from a southerly direction, a similar distance from the traffic lights at the slip road exit from the A1079. Follow the brown tourist information roadside signs for 'Butt Farm Caravan & Camping Site.'