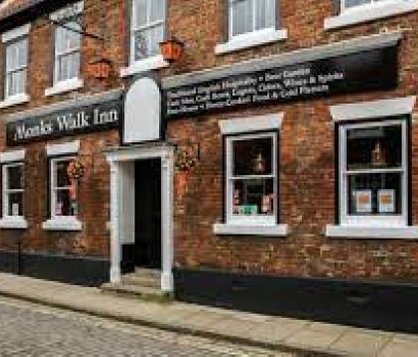 The Monks’ Walk (formerly the George and Dragon) is an ancient collection of Grade II* buildings refronted in the 18th century. Inside, there are exposed timber in the roofs and walls, some of which may date from the 14th century. Massive chimney breasts have also survived. The passage that runs through the buildings is dated 1671 on the north side and has medieval timber-framed walls to the south. One of Beverley’s oldest secular buildings, with many legends attached to it. A large yard to the east, with an extensive beer garden. In 1655, when it belonged to the Bethells of Rise, the inn was called the George ‘in the Londoner Street’, another name for Highgate, after the London merchants who attended the annual fair here. Tours of the inn are available on Heritage Open Days.

The inn will be open for business. It also has a great courtyard with views of the Minster. The tour will show parts normally unvisited and tours will take place when there are enough people, or if you are keen.Contact for the day:Monks Walk 01482864972
www.beverleycivicsociety.co.uk

Halfway down Highgate, east side.