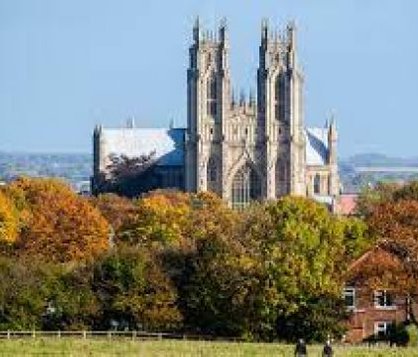 One of the greatest Gothic buildings, there's always something else to find at the Minster.

Beverley Minster, a gothic marvel with a great history, in normal times is open every day of the year for visitors, with special events for Heritage Open Days.

In 2021 we celebrated 1300 years of the great church.
The roots of Beverley Minster go back to the 8th century when John, Bishop of York, founded a monastery for monks and, in a later source, also nuns, under Abbess Polfrida. John was educated at St Hilda’s double house at Whitby so that a monastery of monks and nuns would be familiar to him. John died in the year 721 and was buried in his church; he was canonised in 1037 because of the miracles attributed to him during and after his lifetime. St John of Beverley became the patron saint of the deaf and dumb because he cured a young man who could not hear or speak. Monasteries were places where the poor could go for care during an illness or in their old age, boys were educated, and travellers could seek shelter and hospitality. Beverley was granted the rights of sanctuary – so the Minster became, and remains, a place of worship, sanctuary, healing and pilgrimage.

For Heritage Open Days this year there will be access to a free organ concert on 9 September, a variety of tours on ground level and above, a new interactive exhibition on Sanctuary, and other events across the weekend.

Please see details of what’s on via theMinster website.

Pre-booking:Preferred
Free to explore, but for tours pre-booking is necessary.
Go to:https://www.beverleyminster.org.uk

Please be aware that there may be some uneven floors.

For the free concert and variety of tours please use to the Minster website to find details and if necessary book there.
www.beverleycivicsociety.co.uk
www.beverleyminster.org.uk