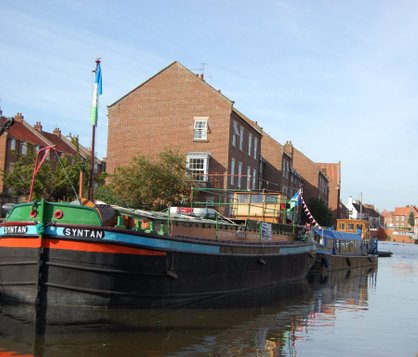 Moored on Beverley Beck are three boats restored by the Beverley Barge Preservation Society which will be open to the public. The largest is the ‘Sheffield’ size barge Syntan, built by the Hepworth shipyard at Paull in 1949 for Richard Hodgsons Tannery and used for transporting tanning materials from Hull docks to the wharf on Beverley Beck. Sun is a former maintenance vessel built in 1960 by Camplings of Goole and is used for charters and public day trips upstream on the River Hull. Mermaid is an ex-Trinity House tender built in Korea in 1986 used for training and trips along Beverley Beck.

Since the middle of the 14th Century, Beverley Beck has been navigable providing the town’s access to the River Hull and beyond. See a Victorian wharf crane alongside where Syntan is moored as a reminder of Beverley’s Industrial past. It’s a ¾ mile walk to the Beverley lock and if you cross over via the lock gates you can return on the opposite bank.
Always a very popular event on this historic waterway.

Wheelchairs and pushchair drivers can see the exteriors and talk to those on hand. Getting on board requires agility.

Boat trips on the Mermaid both days, weather permitting. Just turn up. Members of the Preservation Society will be on hand to act as guides on and off the boats and answer questions.Contact for the day:info@syntanbarge.org.uk
www.beverleycivicsociety.co.uk
www.syntanbarge.org.uk

The town end of Beverley Beck - from the paths beside the water you can see the boats.